Polish copper on the dome of the Temple of Divine Providence 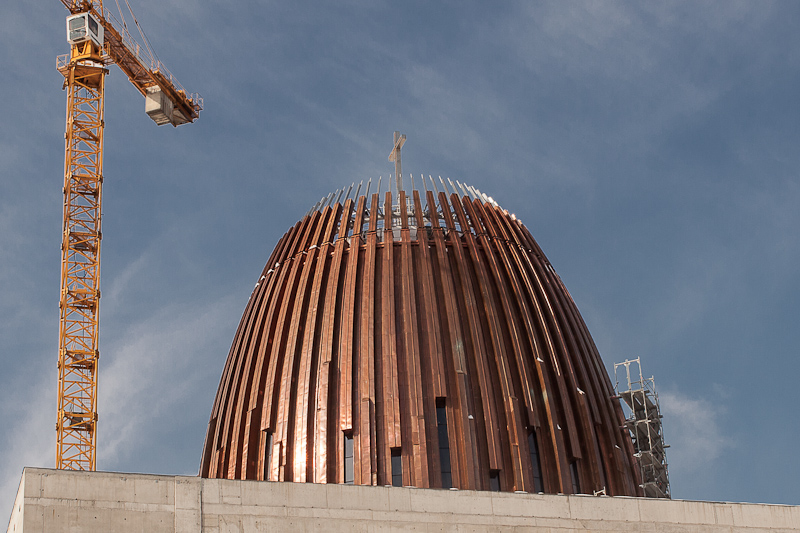 - We are proud to be able to help in the construction of the Temple of Divine Providence and contribute to quicker completion of this outstanding project – said Cecylia Ewa Stankiewicz, the chairman of the Polish Copper Foundation. – The position achieved by KGHM on the global market of copper and silver producers allows the company to support many projects important for Poles and the country.

- I would like to say “God bless you” to all donators – said Cardinal Kazimierz Nycz. – I am aware that in these difficult times every zloty counts. That’s why from the bottom of my heart I would bless everyone who can donate even the smallest amount.

In 2012 the Temple managed to collect 12.6 million PLN, including 3.5 million from the fund raising organised throughout Poland on Thanksgiving Day.

The works on the dome were started in June 2012 and were divided into several stages. The last stage of work on the dome concerned covering the end elements with copper (so called comb). Copper is a material that has characteristic properties. It is resistant to corrosion. The durability of copper roofs is calculated at 700 years and this is due to the durability of the metal itself and the patina, whose layer is created on the copper surfaces. The copper does not require cleaning or other maintenance works. The copper changes its colour as a result of reacting with oxygen – in a few years the shining dome will become green.

The Polish Copper Foundation celebrates its 10th anniversary this year. KGHM is its main founder. The initiative of establishing the Foundation results from pro-social policy of the company, which from the very beginning of the copper industry has been supporting many regional and national projects. Health protection is the main objective of the Foundation. The donations allow purchasing modern medical equipment for hospitals or rehabilitation centres. The statutory objectives of the Foundation include also support for the preservation of national tradition, Polish identity and development of national, civic and cultural awareness.
During its 10 years of existence the Polish Copper Foundation has donated nearly 80 million PLN for the execution of its statutory objectives. KGHM Polska Miedź S.A. has for years been one of the Charity Leaders thanks to the activity of the Polish Copper Foundation.

In order to make browsing this website more comfortable for our users, mainly to adapt the website's layout to their preferences, browser type and preferred language, we reserve the right to collect additional data (sent by the browser as standard) and use the so-called cookie files. We can use such data to analyse content attractiveness and for other statistical purposes.

No, I am asking for more information